Son of Mine: Becoming a Father Through Adoption 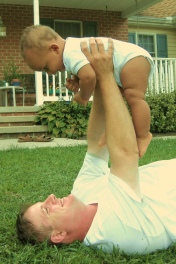 “You know, at 38 years old, I thought my world view was pretty stable. I figured that I had already formed most of my basic opinions and core values. But the day Aidan came into our lives, my world turned upside down in so many beautiful ways—it’s been just awesome.” Justin is a mail carrier by day, a musician by night—and now—a father ‘round the clock.

Justin and his wife Mindee met in college and have been spouses, best friends, and confidantes for nearly two decades.  Up until less than two years ago, neither of them could have fathomed just how different their lives might have been if they had been able to start a family naturally.  Like many couples, Justin and Mindee struggled with infertility.  It was only after they exhausted multiple treatment options and weighed their financial situation that they considered adoption. Consequently, while most of their friends were having children and becoming parents in their twenties, Justin found the time to moonlight as a songwriter, musician and music critic, whilst Mindee pursued a graduate degree. Now that they are in their late thirties, their lives are a little flip-flopped. Most of their friends have children in high school; Justin and Mindee are changing diapers.

Whether or not they express it openly, men who face infertility issues are often particularly angered and frustrated by the inability to continue their bloodline. Before becoming a father through adoption, Justin would have agreed. But for him, the focus has shifted from “bloodline” to “clan.” He is genuinely excited by the prospect of giving another human being a good family, a sense of belonging, and a strong foundation. “I look at my own parents a little differently since Mindee and I adopted our son, Aidan. We’ve always been close, but sharing in the joy of raising Aidan has truly brought us closer together… and it just warms my heart to see that Aidan loves them just as much as I do.”

The couple adopted their son Aidan, now nineteen months old, through the nonprofit agency Adoptions From the Heart when he was less than one week old. Because he and his wife tried for so long to start their own family, Justin feels that it strengthened their resolve to become “really good parents” and gave them a deep appreciation of even the most mundane aspects of parenting. “We had a lot of time to intellectualize the process and to learn as much as we could about both parenting and adoption.”

Justin describes the process as “completely transformational.”  What seemed like potentially just the next phase in a series of emotional concessions actually culminated in a brief but life-altering meeting of child, birth parents, and adoptive parents; a configuration often referred to as the “adoption triad.”  Justin sees it as a “win-win-win situation for everyone involved in the process.”  Ultimately, he hopes for his son Aidan that adoption doesn’t define him, but rather that it becomes just a part of the fabric of his life story. “Even now, we say things like “’Aidan, we are so happy your birth-mom chose us’. We aren’t going to hide the fact that he is adopted from him or drop the ball on him during dinner one evening when he’s twelve. This is his story; we are all just simply grateful to be supporting characters.”

Justin and Mindee are now beginning preparations to adopt a second child—only the waiting doesn’t seem so unbearable this time around. At the onset of their first adoption, they were still grieving the loss of fertility and were unsure of their true feelings about starting a family through adoption.  Raising their son Aidan and having a much better idea of what to expect from the adoption process is helping to make the navigations through mountains of paper work and policy seem almost trivial. Sharing with family and friends about the decision to adopt a second time is exciting.

Justin is a reflective father who appreciates with his whole heart and soul the gift that he has been given. He has been through the ups and downs of struggling with infertility in his marriage, but is elated with the outcome of adoption. He has been blessed with a beautiful son, and feels that this was “meant to be.” “For any man entering the adoption process— if you have any doubt about your own ability to accept and raise a child who is not biologically yours— I want to assure you that you can and you will love and embrace that child as your own.”

Justin, who is a natural storyteller, has continued, albeit less frequently, to compose songs and perform occasional live shows.  He recently wrote a song for Aidan that details his thoughts and feelings about becoming a father through adoption.  The song is aptly entitled “Son of Mine”.