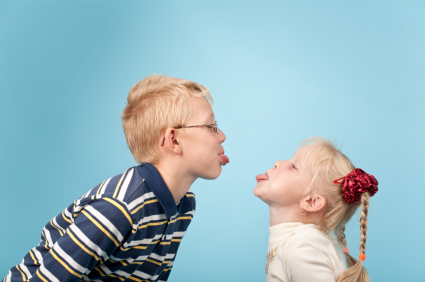 Sibling fights are often about possessions or territory. Where there is more than one child in a family, and any two of the children are closer in age than 6 years, there’s bound to be conflict of some degree between them. Sibling fighting, like marital arguments, is simply inevitable and just as normal. Young children battle it out by pushing and hitting. Older kids shout.

Sibling rivalry is a different issue. It appears when children compete for their parents’ love and attention.

Rivalry develops out of sibling conflict as a result of parental intervention. When parents intervene in a conflict between siblings, one child almost always ends up being identified as the villain and the other as the victim. This is surely not the parents’ intention. In fact, when asked why they intervene, parents tell me, “I want to keep them from hurting each other,” or “I want to help them learn to get along,” or “I’m just trying to teach them how to resolve their problems without fighting.”

Nonetheless, far more often than not, the unspoken message to one child is, “You did something wrong,” while the message to the other child is, “You did not deserve to be treated like that.” This villain-versus-victim showdown transforms conflict into rivalry, because now the children begin competing for the coveted Victim Award, which only a parent can hand out. In effect, the parent sides with and sympathizes with the victim, making him or her the “winner.”

Two things usually happen as a result of this villain-versus-victim showdown: First, the most important: The parent’s strategy backfires, as evidenced by more and greater conflicts between the children. Second, the siblings begin to learn that when in conflict with someone else, there is an advantage to playing the role of the victim.

This realization usually shocks parents, and rightly so. No one wants to teach children, however unintentionally, that playing “victim” is desirable under any circumstances. Unfortunately, this family drama can lay the foundation for a lifelong pattern of misconceptions about how problems are solved. This is especially true if parents consistently award one child the victim role.

Read More About this article and learn some helpful hints and tips at bhg.com.