National Adoption Month is quickly approaching which led us to wonder, how did this celebratory month get its start? Join us on an exploration into our favorite month of the year! 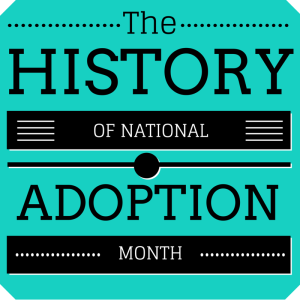 The Beginning of National Adoption Month

National Adoption Month didn’t actually start off as a month long celebration of adoption, but instead was celebrated during one week out of the year. In 1976 the governor of Massachusetts, Michael Dukakis, proclaimed that his state would have an Adoption Week in hopes to promote awareness for the needs of children in foster care and the lack of adoptive families. Some reports say that later in 1976, President Gerald Ford announced that the Adoption Week started by Dukakis would be celebrated nationally in the United States. The Child Welfare National Adoption Month page explains that President Reagan proclaimed the first National Adoption Week on November 13, 1984. Proclamation 5280 states:

Families have always stood at the center of our society, preserving good and worthy traditions from our past and entrusting those traditions to our children, our greatest hope for the future. At a time when many fear that the family is in decline, it is fitting that we give special recognition to those who are rebuilding families by promoting adoption.

National Adoption Week gives us an opportunity to reaffirm our commitment to give every child waiting to be adopted the chance to become part of a family. During this Thanksgiving season, let us work to encourage community acceptance and support for adoption and take time to recognize the efforts of the parent groups and agencies that assure adoptive placements for waiting children. Most importantly, let us pay tribute to those special couples who have opened their homes and hearts to adopted children, forming the bonds of love that we call the family.

After President Reagan’s proclamation, more and more states began participating in Adoption Week activities and there just didn’t seem to be enough time to fit in everything that activists wanted to accomplish in one week. In 1995 November was proclaimed as National Adoption Month by President Clinton. Proclamation 6846 states:

For many people across the United States, adoption provides a means for building and strengthening families. It places children into loving, permanent homes where they can flourish and grow up to become happy, healthy, productive members of our national community. Adoption also enables adults to experience the unique joys of parenthood.

As many as 70,000 children in America’s foster care system may need adoptive families in the next few years—young people of all ages and backgrounds who, for whatever reason, cannot return to their original homes. Many, but not all, are children with special needs. These young people long for the same affection, security, and stability that most of us take for granted, yet too many have waited—and will continue to wait—for years to be adopted.

My Administration has taken important actions to encourage adoption and to support the wonderful families that choose to open their hearts and homes to waiting children. The Multiethnic Placement Act, which I signed into law in October 1994, helps to facilitate adoption for all children and families, regardless of their race or ethnic origin. We will continue to champion and improve programs that break down barriers to adoption through aggressive recruitment of families, financial aid to support placements, and technical assistance to agencies committed to special needs adoption.

As we observe National Adoption Month, we celebrate these achievements and recognize the rewards of adoption, but we must also remember that much work remains to be done. Citizens from all communities and organizations from the public and private sectors must join together to renew our commitment to finding permanent homes for each one of America’s children. 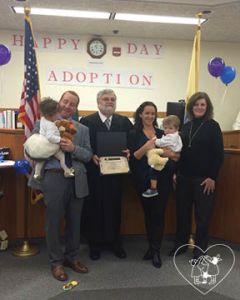 During the month of November, families can celebrate and bring awareness to the beauty of open adoption, the hundreds of thousands of children in foster care and just general support for the states, communities and agencies that make resources available for those touched by adoption. Keep an eye out for the activities planned by your agency, or engage in social media contests, sharing your adoption experiences. For example, Adoptions From The Heart celebrates National Adoption Month with the Paper Heart Project. This fundraiser encourages local business sell purple hearts cut from paper by local students and have supporters sign their names before displaying, showing their support of adoption.

How have you celebrated National Adoption Month?

1 thought on “The History of National Adoption Month”