Adoptions From The Heart is proud to be a supporter of HRC, the Human Rights Campaign, and their All Children All Families initiative that aims to achieve safety, permanency and well-being by improving practices with LGBT youth and families. AFTH is also proud to be a non-profit adoption agency that allows singles, married couples, and LGBT families or singles to adopt through their programs. 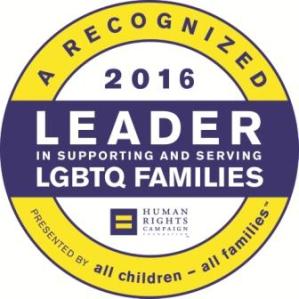 Bryan Samuels, the former commissioner of the U.S. Administration on Children, Youth, and Families said, “Every child and youth who is unable to live with his or her parents is entitled to a safe, loving and affirming foster care placement, irrespective of the young person’s sexual orientation, gender identity or gender expression.” This post will explore and offer advice for families who are caring for LGBTQ children whether those children are biological, adopted or fostered.

Getting Acquainted with the Terminology: A New Acronym

There are a lot of LGBT terms that people may not be familiar with and the HRC has added a new acronym into the mix.
“SOGIE” stands for Sexual Orientation, Gender Identity and Expression.
They explained, it is important to ensure the healthy development of SOGIE. A shift of focus from LGBTQ children and youth to a focus on SOGIE of all children is useful for several reasons. Every child and youth has sexual orientation and gender identity and expression, the development of SOGIE is universal, normative and essential to their well-being.

How to Support and Serve LGBTQ Youth

For more insight into these points, visit HRC.

Child Welfare by the Numbers