Hello readers! I am excited to be one of the newest members of Adoptions From The Heart’s Marketing team. As AFTH’s Donor Development & Marketing Coordinator and an adoptee myself, I want to introduce a recurring blog segment called My Adoption Story.

My Adoption Story will reveal personal adoption stories from all spectrums of this unique reality. My goal in designing this interview-style segment is to offer a platform to the diversity of life stories created by the adoption experience. For our readers, I want to invite you into the incredible variations of family, life and love that adoption creates.

As our first story, I will share my own

In 1987, as a newborn infant, I was adopted from Bogota, Colombia by Jewish, American parents from Long Island, New York. My parents, Pat & Irv Brookstein had also adopted my brother Jesse four years before me from Bogota through the adoption agency FANA (Foundation for the Assistance of Abandoned Children).

I was born on March 21st 1987 severely underweight and suffering from bronchial pneumonia along with many other babies in the agency at the time. My mom told me every moment until arriving in Colombia that she suffered greatly from being unable to soothe and comfort me in my fragile state.

My adoption was closed and I departed from Bogota with a name and nationality that would soon be replaced. The Colombian, Adriana Gonzalez without a home or family soon became Alyssa Brookstein, a US American with two loving parents and an adoring older brother.

Do you have a memory of finding out you were adopted?

I have no memory of finding out. It has felt like I have always known. Apparently, my brother told me upon his own childhood impulse when I was a toddler. He broke the news to me during playtime. I took the news without a care and continued focusing on what was in front of me, my toys!

Why did your parents decide to adopt?

My parents chose to adopt after years of trying to get pregnant. My mom experienced multiple miscarriages culminating in a near death experience from an ectopic rupture. During her ectopic rupture, she died on the table and remembered having an out-of-body experience. She recalls floating above her body and wanting to go towards a light but a message was communicated to her that she had more work to do. Soon after this defining experience my mom decided to adopt.

While growing up did you ever struggle with your adoption or feeling like you belong? 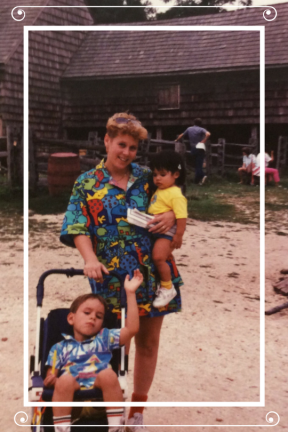 I never felt like I did not belong with my family because my mom constantly told my brother and I that she wanted children more than anything in life which reinforced the knowledge that we were dearly wanted, even wished for long before we were born.  As an adolescent, my family’s obstacles overshadowed my personal struggles so I kept my pain to myself and struggled inwardly. In retrospect, I can see that some of my struggles were related to adoption but I was so silent with my confusion that I would have had no idea how to communicate my inward struggle. So, the answer is yes, I struggled but so silently even I was unaware of the anguish.

As an adoptee, do you ever feel like something is missing in not knowing your birth-family?

I do have a faint recollection of what came before Alyssa Brookstein and with that, a faint curiosity. This question is difficult because my experience is like Plato’s allegory of the cave; my reality is such that I am so far removed from my Colombian reality that it is near impossible to imagine it. In addition, I have experienced boundless love from my mom & brother that never made me want for someone or something else. I also love the diversity adoption has blessed me with, I am a Colombian, American Jew! I am empowered by my adoption mystery because it adds immensely to my sense of self. I find peace in my personal unknown.

Do you want to search for your birth family?

It is often said that adoption is built on loss. As an adoptee, how do you deal with loss in your life?

As an adoptee, great loss revives intense and disorienting waves of emotion. I have no waking memory about the 1st great separation I experienced in life but I have an acute emotional awareness that I survived something catastrophic as an infant. In the wild, newborns will not survive without the protection of their mothers. I feel I was aware that my life was threatened, first because I lost my lifeline, my mother, and second because I was gravely ill. I feel that every living being knows when their life is teetering on the edge of death no matter their state of consciousness. I was no different.

As an adoptee, the loss of a mother has been the most profound experience for me because I have lived through it twice. My mom Pat passed on in 2014 after surviving 14 years with cancer. In a strange way, I feel like I was more equipped than most to cope with great loss because I had already survived the greatest loss in the most vulnerable condition but my experience also made me that much more fearful. Could I survive the loss of a mother for a second time? My adoption has given me a deep, inner wisdom about loss but I still struggle immensely on how to manage the compounding losses.

It may be true that adoption is built on loss but it is also built on love. Before I conclude I want to say that being adopted into a family does not mean that the family is always ready, just like many traditional families. Like many moms who dream of having their own children, my mom dreamed of my brother and me and because of adoption her dream came true. My dad was absent most of our lives and for my many years his abandonment caused me to question my adoption in a negative light but without him my mom would have been unable to adopt. Ultimately My Adoption Story taught me that love is what binds people together more than anything else in life, more than genetics, family names, religion or race. Love was passed on to me and my brother which is why he and his wife are now the proud parents of 6 foster children and why I am working for Adoptions From The Heart.