Raising a child as a single parent might be viewed by others as an “unconventional” life choice but to mothers and fathers who choose to do it on their own; they just want to make their dream into reality. Single men and women want to adopt a child for many of the same reasons that couples want to. They want to be a parent, have a child to love, want to give a child a home, pregnancy might not be an option, and the list could go on. There has been an increasing in single adoptive parents over the past few years and whatever the reasons leading them to adoption, their journey is something to be celebrated.

Many people hear the word “single parent” and automatically think that a tragedy or divorce caused their single status but that not always the case. There are many singles who make the choice to enter the world of parenthood.

The past few decades have seen an incredible increase in the number of families headed by single mothers. Unlike the stereotypical images of an un-wed, poverty-stricken, uneducated, and young teen or woman facing parenthood alone, an increasing number of successful, single well-educated professional women in their 30’s and 40’s are arriving at motherhood through adoption by choice. AFTH has quite a few singles, both men and women, who are looking to adopt.

“I am so excited to become a mother-something I knew I wanted from when I was just a little girl. Although having a biological child has not been a possibility for me, I decided that should not stop me from making my dreams into reality of becoming a parent.”-Hopeful single adoptive parent at AFTH

To read more about some of our single’s that are waiting to adopt, check out our website where you can read more into their profile books and learn about their journey and how they ended up deciding to adopt. www.afth.org/meet-our-families

Statistics of Single Parent Households in the US

Single parenthood is very common in the United States. Even today when 50% of U.S. children will spend some part of their childhoods in a single parent family, there is still contempt for single moms and dads. Did you know that more than 22 million children under the age of 21 are being raised in a single parent household? Here are just a few more appealing statistics. http://singleparents.about.com/od/legalissues/p/portrait.htm

Even today when 50% of U.S. children will spend some part of their childhood in a single parent family, there are still often many misperceptions about single parenthood however times are changing and society is beginning to embrace the many different ways a family can be formed.

Unfortunately years ago, if you had gone to an adoption agency as a single person and applied for a child, you would have been turned down. Now, thousands of children in the United States and other countries are living with single men and women who have chosen to become parents and who have been given the opportunity to provide a loving home for a child. Below are just some statistics about adoption and adopting as a single parent. http://statistics.adoption.com/information/adoption-statistics-single-parents.html

Most single parents agree that the joy of bringing a child into your life far outweighs the challenges added as being a single parent. Single parents, whether through adoption or circumstance, do face unique aspects to parenting solely due to the fact that there is one of them as opposed to two. There can also be some benefits of single parenthood such as having less people to coordinate parenting decisions with. One of the biggest obstacles many single parents may face are the opinions and objections society might have. Sadly, there are some people who still believe that singles should not be allowed to adopt children. Here are just some arguments and opinions many single parents by choice have heard along the way.

Finding a good support system through the way

With all of the opinions, arguments and judgments you will surely hear along the way during you adoption process as a single parent know that it is important to be strong in the decision you make and know that you can make your dream of parenthood true. To help, it is important to find a good support system, a network of people who care about you and who will be there for you both emotionally and physically when you need it.

We find that many of the prospective adoptive parents working with AFTH say that they often find additional support as they go through the adoption process. Adoption is a thread that can pull many people together throughout the journey. You may find friends and neighbors as well as other hopeful adoptive parents you meet through the agency classes and events that have a connection to adoption that you will gain as resources for support along the way.

Below are just some helpful organizations geared to single parents that can be there for you whether you have a question or just need someone to talk to that can relate to your situation.

One Step at a Time 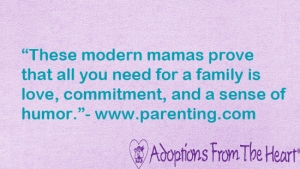 Whether you are thinking about adopting as a single parent or you know someone that is a single parent, remember that millions of children are growing up healthy and happy in single-parent households. And that single hopeful adoptive parents are just trying to pursue their dream of parenthood just as any other parent. Like all worthwhile journeys, the path of single adoptive parenthood is easiest when taken one step at a time. To read more about single parent households and how less than a quarter of American families fit the old “Leave It To Beaver” model of a married, two-parent, opposite-sex household with children, check out our Families Are Changing post from 2009. https://afth.wordpress.com/2010/09/29/families-are-changing/

2 thoughts on “Adopting As a Single Parent by Choice, Making Dreams into Reality!”